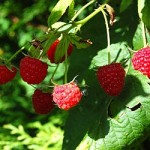 I was in my favorite supplement retail store awhile back and was witness to an appalling scene. Apparently, a certain celebrity TV doctor was making outrageous fat burning and weight loss claims for raspberry ketone on his show. I found myself caught in the middle of a near panic run at the shelves by a hoard of wild-eyed desperate consumers looking for a quick weight loss fix in a pill. The shelves had long ago been denuded of the fantastical ketone and the store clerks had gone into defense mode. This post will try to provide a more sober evaluation of raspberry ketone and weight loss.

What is Raspberry Ketone?

Raspberry ketone is what gives raspberries their characteristic odor and flavor. This compound is used in the perfume and flavoring industries. According to the Wikipedia entry, it is one of the most expensive natural flavor components used in the food industry and can fetch prices as high as $20,000 per kg!

However, it is easily and cheaply synthesized in the lab.

The raspberry ketone marketed by the supplements industry is, in all probability, synthetic.

However, if one to were to read the label on a bottle of raspberry ketone, one would have no indication it was synthetic. There should be standards for this information to appear on the label.

After all, the food industry must indicate “artificially flavored” for such naturally occurring flavor components; like vanillin that is synthetically produced.

I also don’t understand why its pluralized on the product labels as: “Raspberry Ketones”. It is a single specific compound not a bunch of similar compounds as would occur for example with a mixture of polyphenols in green tea such as “Green Tea Polyphenols.”

Actually using the plural would suggest it is from natural source, since there is bound to be a mixture of ketones present in the plant. The Swanson Health Product’s “Razberi-K Raspberry Ketones” lists a single ingredient (besides fillers) as: 4- (4-hydroxyphenyl) butan-2-one.

I shudder to think of the profit-grab that could be going on here with churning this stuff out by the vat full to exploit the demand for a new miracle weight loss pill.

What Started the Craze?

Well, apparently someone figured out that raspberry ketone is similar in chemical structure to capsaicin. Capsaicin is what makes hot peppers hot and has shown promise as a fat burning agent, but I personally don’t see the similarity in chemical structure between the two. One of the most glaring differences being that capsaicin is an alkaloid; since it contains nitrogen and raspberry ketone does not.

What is the Research Behind Raspberry Ketone?

Two studies fueled the craze: one conducted on mice and one on fat cells in culture. The mice study was done in Japan at a medical school and the other by the South Korean FDA.

The mouse study showed positive results on a variety of fat metabolic processes in mice fed a high fat diet however the amount required for an effect was equivalent to a human taking thousands of milligrams (mg).

Supplements of the ketone come in 100 mg doses.

I could find no human studies to date.

For an erudite taking to task of Dr. Oz on his shameless promotion of raspberry ketone see Dr. Andrew Lessman’s “With All Due Respect to Dr. Oz: Raspberry Ketone is not a Fat-Burning Miracle.”