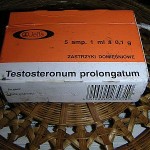 A prior post on the product Alphastat generated quite a bit of traffic and comments. It has also generated a considerable bit of internal rumination on my part as to the role of one of its ingredients, astaxanthin, in influencing testosterone levels. Is astaxanthin’s role in Alphastat as an aromatase inhibitor, an agent that prevents conversion of testosterone to estrogen, or mere filler to justify charging premium prices? What is the research behind this and is it valid? Finally are there other natural compounds that are more effective and substantiated aromatase inhibitors on the market?

What Is An Aromatase Inhibitor?

An aromatase inhibitor is a compound that prevents the conversion of androgens like testosterone to estrogenic compounds. Obviously this would be of importance to men since estrogen would lead to undesirable characteristics like male breasts, metabolic syndrome and male pattern baldness. This problem is most vividly illustrated in bodybuilders taking anabolic steroids developing what is known in the lexicon as “bitch tits”. Why would this happen in men when they are directly taking testosterone and potent testosterone derivatives? The short answer is that the drastically increased testosterone upsets the hormonal balance and the excess is converted to estrogen via the enzyme aromatase. This is why aromatase inhibitors are of great interest to the hard core juicers.

What Is The Evidence That Astaxanthin Is An Aromatase Inhibitor?

This is where things get murky. Search of the Internet for “astaxanthin aromatase inhibitor” generates results that are all based on a very weak foundation that threatens to come tumbling down on further scrutiny. Namely, it comes down to one study commissioned by the makers of Alphastat. The study was uncontrolled, conducted in Cameroon and appeared in a not so prestigious scientific journal.

Alphastat is a mixture of several compounds meant to influence positive testosterone levels by two mechanisms: (1) 5-alpha-reductase inhibition and (2) aromatase inhibition. The human study makes assumptions on which of the three ingedients in alphastat is performing which function. Ideally each ingredient should have been tested on its own to sort this out. However, in deference to these researchers; human studies are costly to undertake and proper controls and experimental groups would have been burdensome both in cost and logistics.

Conducting experiments in test tubes or in vitro studies would help to tease these functions of each ingredient out. Prostate or breast cell cultures can be incubated with these compounds in conjunction with radio labeled testosterone to determine their effect on testosterone’s conversion to estrogen for aromatase activity inhibition and its conversion to dihydrotestosterone (DHT) for 5-alpha-reductase inhibition.

What Are Some Naturally Occurring Aromatase Inhibitors?

Zinc monomethionine aspartate is also present in Alphastat and has been shown to posses aromatase inhibitory properties but would be needed in high, potentially toxic doses. I should mention that the Alphastat study used heavy-handed doses of their product to achieve positive results. Many times more than the suggested dosage on their product. Minerals like zinc are termed “trace minerals” for a reason. Only trace amounts are needed for biological activity and are toxic above trace amounts.

The best place to start to look for naturally effective aromatase inhibitors is to see what synthetic compounds pharmaceutical companies are marketing as aromatase inhibitors. This may be counterintuitive but they have the resources to conduct thorough research and often rely on modifying natural compounds that show potential.

Since aromatase is an enzyme that interacts with testosterone in a “lock and key” way it would follow that inhibitors will have to possess chemical structures similar to testosterone for inhibition to occur. These compounds fit into the “lock” of the enzyme to tie it up from interacting with testosterone. One does not need to possess knowledge of organic chemistry to note similarity in chemical structures. If one can play the simple kids puzzles in the comics section of “find the differences between these two drawings” then they can do this for chemical structures as well. But in this case we are looking for the overwhelming similarities between the two. Look at figure 3 in this article and one can readily see the similarity between the flavonoid and isoflavonoid structures and testosterone. One would be harder pressed to do this for astaxanthin which is an entirely different category of compounds known as the carotenoids.

The flavonoids chrysin, xanthohumol, quercetin, apigenin, narigenin all posses aromatase inhibitory properties and are available in supplement form. An interesting product Super MiraForte from The Life Extension Foundation contains chrysin and other compounds, like a methanolic extract of stinging nettles root, that work together to influence positive testosterone levels.