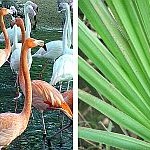 This combo will be of interest to men with enlarged prostates as well as the weightlifter looking to increase testosterone levels. Middle-aged men suffering from low testosterone levels or male pattern baldness, might also benefit from this potent combo.

Dihydrotestosterone (DHT) is a a form of testosterone that is known as “Bad Testosterone” because it can lead to male pattern baldness and prostate problems. DHT is produced in the body from testosterone (T). Saw palmetto helps to prevent DHT from forming.

Since it prevents precious testosterone from being lost to DHT it can effectively lead to an increase in T (testosterone) levels.

Astaxanthin was extensively reviewed in a previous post. Testosterone can be converted to the female hormone, estrogen, in men. This is especially true for middle-aged men with pot-bellies or with excessive alcohol consumption. Astaxanthin has been shown to block this process from occurring in the body.

The Beauty of the Combo:

An analogy as to how this combo works to maintain good testosterone levels is to think of your precious T being poured into a bucket. There are some round holes on the bottom of the bucket through which your T is leaking (DHT).

Imagine Saw Palmetto being round pegs that plug the holes to prevent the leaks. Now imagine there are square holes around the top of the pail. With the addition of the Saw Palmetto, the T level rises and starts to spill through the top square holes (E). Following this analogy, astaxanthin would be the square pegs that plug the top holes preventing the spillover into estrogen.

alphasta is the combination of saw palmetto and astaxanthin. Is taking the supplemts as efetcive? If so, what is the ratio one should take? For exaxple, a recommended dose is 800MG.

How much of each supplement is required to make up the optimum blend?

Mike, the research on Alphastat was conducted with with two doses, 800mg and 2,000mg. Both doses were effective in raising testosterone and lowering DHT. Only the the stronger dose (2,000 mg) was effective in lowering estradiol (http://www.ergo-log.com/astaxanthinetestosterone.html).

Unfortunately, the saw palmetto/astaxanthin is listed as 200 mg of a patented formulation in the Aphastat product. Therefore there is no way to tell how much of these compounds are actually present or even the strength of the saw palmetto extract or if there was any standardization. I personally think this type of labeling is deceptive and an excuse to charge exorbitant prices for the product.

I found astaxanthin in 10 Mg. Dose from Puritan Pride. For some reason I am skeptical only because no one else offers that dosage amount. Can you comment ?

A cursory review of astaxanthin supplements revealed several other companies providing high dose gel caps from 10 to 12 mg. One should keep in mind that when it comes to supplements and for a lot of other things in life; more is not necessarily better. Oftentimes, it is more effective to take smaller doses divided throughout the day than either one high dose or multiple high doses.

I’m guessing you’re concerned whether this dosage is too good to be true. Consumer Reports tested a variety of astaxanthin products and found they all contained the amounts listed on the bottle.